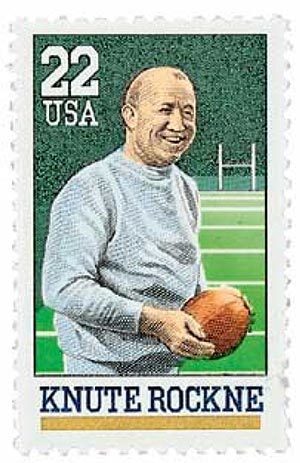 Ronald Reagan returned in triumph Wednesday to the place that launched his movie acting career and perhaps even his presidency, taking up the role of ''the Gipper'' once again as he stepped back in nostalgia to the golden days.

Reliving his days as a young actor playing the role of football star George Gipp, Reagan came to Notre Dame to honor the memory of coach Knute Rockne and the legend the President has taken on as his own.

In a speech dedicating the U.S. Postal Service's issuance of a Knute Rockne commemorative stamp to mark the 100th anniversary of Rockne`s birth, Reagan recalled with joy the long-ago days when he came to Notre Dame to star as the Gipper in the 1940 film hit, ''Knute Rockne: All American.''

''The role was a young actor's dream,'' said Reagan, who long ago lifted the saying, ''Win one for the Gipper'' and made it a stock-in-trade of his political life. ''It had a great entrance, an action middle and a death scene right out of the opera.''

The Joyce Athletic and Convocation Center here became a giant screening room as the university played several clips from the movie to hearty applause from the packed basketball arena.

Then the 77-year-old Reagan regaled his young audience with stories about how he almost did not get the part of Gipp, a star Notre Dame halfback whose death from pneumonia in 1920 was used by Rockne as inspiration for the Fighting Irish in a come-from-behind win over Army eight years later.

The President recalled answering an ad in Variety magazine, only to be told by actor Pat O`Brien that the production was looking for a ''name actor'' and not an unknown like Reagan.

Later, Reagan said, he had to get a picture of himself in his college football uniform to persuade producer Hal Wallis he was big enough to play the part of Gipp.

Finally, they gave him a screen test that was to become a famous moment in the movie.

It came, he said, when O`Brien, playing the role of Rockne, told Reagan to carry the ball in a practice session. The President, drawing himself up in his best imitation of a young actor`s performance nearly a half-century ago, cocked his eyebrow and said, ''How far?''

The line got laughs from the overflow crowd of students gathered here.

But the crowd grew solemn when Reagan invoked the memory of Rockne, the Norwegian immigrant and onetime Chicago postal worker who went on to lasting fame as Notre Dame's football coach and the man who introduced the forward pass.

The President hailed Rockne as a man of faith, vision, ingenuity and virtue whose life touched millions before dying in 1931 in a Kansas plane crash that stunned the nation.

''Someone put it so well at the time,'' Reagan said. ''Knute Rockne did more spiritual good than a thousand preachers. His career was a sermon in right living.''