Legendary Irish band U2 performed at the Joyce Center on Oct. 10, 2001, beginning the U.S. leg of its "Elevation Tour." The tour was nearly canceled following the devastating events of 9/11 and the anthrax attacks of 2001, but that didn't stop a capacity crowd from packing the venue.

Stuck in a Moment

Well before Bono and company took the Joyce Center stage on October 10, 2001, the arena was trembling with energy. The crowd on the floor had long since set up camp along both sides of the heart-shaped runways that broke away from the ends of the main stage and rejoined deep within their midst, and as the band struck the opening notes of their upbeat radio anthem “Beautiful Day” from off stage, a sea of indistinguishable murmurs exploded into a wave of screams, whistles and shouts. The capacity crowd, some 12,000 strong, had been awakened, and I couldn’t help but wonder if the Heisman trophies in the upstairs lobby were wiggling their way toward extra yards as the building vibrated with satisfaction.

As it was for many U2 fans, the band’s recently released album All That You Can’t Leave Behind had become the soundtrack of my post-9/11 experience. When I think back, I see an endless sea of television screens filled with images of smoke and debris, I smell the wet leaves of autumn, and I hear Bono’s forlorn voice decrying violence in “Peace on Earth.” For me, it was a period of waiting. Waiting to hear news. Waiting for answers. Waiting to feel a more direct connection with two distant American cities and their innocent victims. 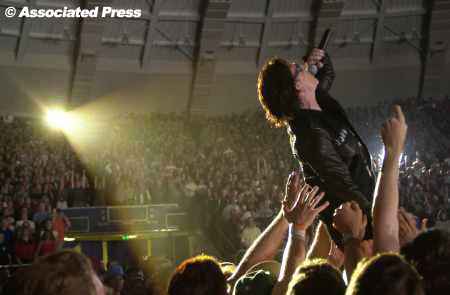 For the kind of reasons that make sense to college students, I went online that broken month and bought tickets to the upcoming U2 concert at Notre Dame. It was an emotional escape as well as a physical escape from my DePauw University campus in southern Indiana; it was something to look forward to.

With the gray scenes of terror percolating in the back of my mind, I joined the uproar surrounding U2’s grand entrance. It felt surprisingly good — even cathartic — to go ballistic over four guys in entirely too much leather. As Bono and his sideman, The Edge, hit their stride, strutting up and down their respective catwalks and rattling off such old favorites as “New Year’s Day,” “(Pride) In The Name of Love” and “Sunday, Bloody Sunday,” the audience swallowed every word. As the backlit magnetism of Bono fueled the fire, The Edge’s impassioned guitar riffs heightened the suspense. When the second set closed with the slow-building crescendo of “With or Without You” the Joyce Center was in a frenzy, salivating for resolution.

The minutes passed, filled only with a steady, swollen chorus of applause. As the band retook the stage with a forceful rendition of “Elevation,” masterfully blending hypnotic chord progressions and whimsical solos beneath a shower of neon light, it was clear that something special was brewing.

Of all the songs in U2’s repertoire that have the power to transcend mere words and chords, the band segued into a subtle and brilliant 10-minute take on “One,” which transitioned through “Peace on Earth” and finally into “Walk On,” a song off their newest album. With The Edge pounding away at the infectious melodies of this grand finale and the crowd chanting “Hallelujah!” to the rhythm, Bono brought out members of the New York Police Department and Fire Department and led them on a circuit around the heart-shaped stage. From my perch, I saw audience members scrambling over each other as the procession drew near, only to bypass Bono and shake the hands of middle-aged firemen from Queens. In that moment, U2 brought a small pocket of America back in touch with itself.

Almost five years to the day after that concert, I’m sitting at my computer listening to a bootlegged copy of the show, reliving every revelation as if it were yesterday. I feel the goose bumps, the connection, the unbridled purging of emotion. With the benefit of time and perspective, I hear an audience intent on escapism and a body of music that empowers a community of action. I hear voices chanting “USA! USA! USA!” as an Irish band heads back to its dressing room.