From Chapter 22 of What Though the Odds, by Haley Scott DeMaria

Most Notre Dame football fans recall the 1993 season. We played and defeated the 1990s powerhouse Florida State University in a #1 vs. #2 matchup. The Fighting Irish were ranked #2, but the favored team in this home game (was Florida State). It was billed as the “Game of the Century,” and the campus was abuzz with excitement and press. 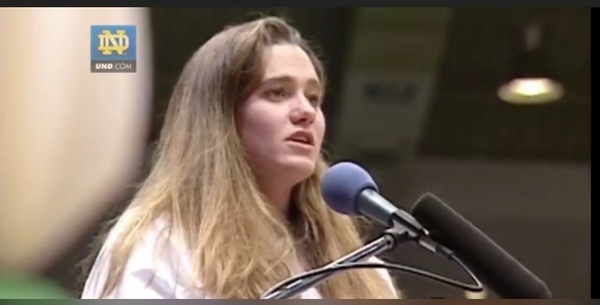 The pep rally for the “Game of the Century” was held one week after my first race, on the Friday night before the football game. The basketball arena overflowed with fans and students. We had a swim meet that afternoon and most swimmers rushed through warm-down, barely showering, to sneak through the back door to the floor of the arena. I asked Coach if I could skip the last relay; I had a speech to write.

I too walked through the back corridors of the Joyce Center, from the pool to the basketball arena. But I was stopped in the hallway and told to wait with the football players who were lined up to parade into the pep rally. Standing there between two much larger student-athletes, I heard the buzz:

I wanted to disappear into the wall I was leaning against.

“It better be somebody good. This is a big game!”

It was then, I think, that they noticed there was a female standing among them. I do not know if they knew who I was, but I would guess some of them did. I smiled and said, “It’s just me.”

Thankfully, one of the players, who it was I cannot recall, replied without hesitation, “It is someone good. That’s awesome!”

And such was my first pep rally speech. 25 years later, I still remember the feeling of walking into the arena behind Coach Holtz. I still remember looking up from the podium and seeing my teammates sitting on the floor encouraging me, as they always did…and still do. I barely remember what I said, but it had something to do with how Notre Dame athletes know how to beat the odds.

After the Notre Dame women's swim team suffered a fatal bus crash on Jan. 24 1992 — killing Meghan Beeler and Colleen Hipp and injuring several others — Haley Scott (DeMaria) faced a lifetime of paralysis. Refusing to take 'No' for an answer, Scott not only set a goal to walk again, but to return to the pool and swim for the Irish. She did just that and was honored as the pep rally speaker before No. 2 Notre Dame's "Game of the Century" showdown with No. 1 Florida State in November 1993.