Thirty-five years ago the “Blizzard of 1978” descended on Notre Dame. The weather forecast for Thursday, Jan. 26, had sounded the alert: “Blizzard warning today. Snow, heavy at times, with strong winds causing considerable blowing and drifting snow. High around 10. Cloudy, windy and very cold tonight and tomorrow with occasional periods of snow. Low tonight around zero. Highs tomorrow in the low teens.” In other words, typical winter weather in South Bend … but this storm proved to be spectacular. Forty-one inches of snow fell over the next three days, bringing January’s total to 85 inches. Drifts of up to 20 feet were reported. 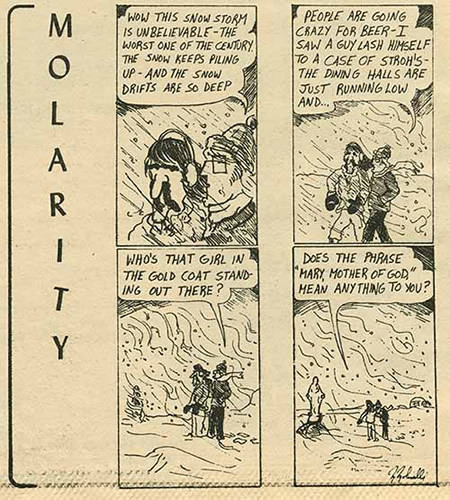 The entire area was paralyzed. Most roads were impassable, nearly cutting the campus off from the city. Emergency vehicles got stranded even on major thoroughfares such as State Road 23. Students in Campus View Apartments tried to help a woman in labor whose ambulance was stuck, but the Red Cross arrived just in time. Classes on campus were canceled for three days, which was unprecedented at Notre Dame, and the Observer’s headline on Jan. 31 joyously reported “Surprise!! No make-up classes!” when the normal schedule resumed.

Students put their unexpected free time to various creative uses. A group of seven tied themselves together with “life lines” for a Thursday night expedition to Senior Bar. On Sunday and Monday 200 volunteers from Notre Dame and St. Mary’s shoveled snow for South Bend’s elderly or handicapped residents, some of whom could not open their outside doors due to drifts of six to eight feet. There was much general cavorting in the snow, both on and off campus. Students experimented with “porch diving” into snow drifts, and Notre Dame Security personnel transported 18 of them, most of whom had sprained ankles, to the hospital.

The Michiana Regional Airport opened only once — to let the plane carrying the University of Maryland basketball team land. The Irish were scheduled to face the Terrapins on Jan. 29 and, with South Bend still under a snow emergency, the Joyce Center became a general-admission ballpark. Anyone that could make it to the area was admitted.

In the words of alumnus James Zarzana: “True to form, the Irish student body came out of their snow-bound dorms and flowed towards the arena, their heads barely visible along the snow-cleared path. A trench had been carved out for them just for this game. It was like watching a white-shrouded World War I trench system without barbed wire.”

Most campus employees were sent home on Thursday morning, not to return until Tuesday, Jan. 31. Improvisation was required to keep essential functions, such as food services and the power plant, in operation. Personnel who could not get home slept in unusual locations, such as the dining hall basement, with students helping by bringing them pillows and blankets.

The Library closed only on Friday, managing to stay open during the rest of the Blizzard. Some employees lived near enough to walk to campus, and could maintain basic operations with the assistance of student workers. The University’s Telecommunications office was located in the Library’s basement, and three operators stayed there continuously from Thursday morning through Monday night. They were pleased to discover housekeeping’s shower tucked in a corner of the basement.

Architecture undergraduate Michael Molinelli (’82) was the Observer’s regular cartoonist, with his “Molarity” strip carried five days per week. The one reproduced here, with his permission, ran on Jan. 31, 1978.

This tale is especially timely in the context of the University’s recent closing for half of the day on Monday, Jan. 27, and all day on Tuesday, Jan. 28, 2014. This was due to dangerously cold temperatures, however, not to an overabundance of snow.